MATT EATON MEMORIAL GOLF TOURNAMENT
"Always make a total effort, even when the odds are against you." 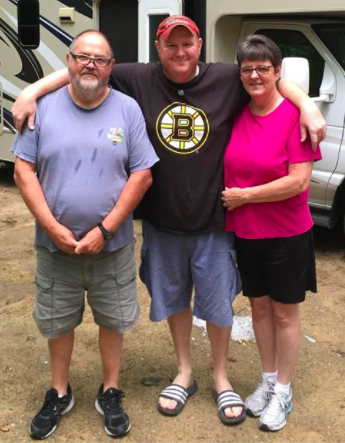 How do I describe our remarkable son Matthew Eaton in a couple of paragraphs? As a child he was on the shy side but as he went through school, made friends and played sports, his confidence grew. He was the go to person when anyone had a problem or just needed to talk. He worked hard and was always looking for new ways to make the meetings and events for AATS enjoyable for “the Docs”. He was fiercely loyal to his family and friends- he always had our backs. Matthew was especially close with his Grandmother, who passed away in 2015. Theirs was a special bond. His gifts were the highlight of any occasion.  He picked each one out special for everyone on his list and we all couldn’t wait to open the “Matt gift”. His generosity was second to none- he had a heart of gold. He so looked forward to the Frozen Four with his Dad Kenny, Bryan and Dan and camping at Papoose Pond every summer for 2 weeks.  Any time he could golf he was happy, especially with Bryan, Bub and Blair.
Matthew was diagnosed on Christmas Eve in 2015. From the first day we all believed that he could beat “the disease that doesn’t discriminate”. Of course there were down moments, especially not knowing how a non-smoker had Stage 4 lung cancer. Most of these he kept to himself because he didn’t want to make it worse for us. He chose to move past the why as there really were no answers. He learned what the best chemo foods were for him so he had them ready for chemo weeks. He read up extensively on this disease, how to best combat the side effects and push himself but not too much. Golfing pre-surgery was a must and he made it out a few times.  By the end of last summer, we thought he was getting back to normal. Then the brain tumor showed up but he recovered well from that. Unfortunately, cells had traveled to his spinal fluid.  How do you handle being told that you are going to die at 33 years old? Matthew did it with grace and courage.
His longtime friends put in a lot of work to set up this tournament. He would have been so pleased that people would be able to enjoy a game of golf and benefit cancer research so someone else’s life would not be cut short as his was. Matthew had so much more to accomplish and enjoy in life but right up until the end he was thinking of how to make it easier for his Mom and Dad. That’s just who he was- trying to protect everyone and make their life better.  He was the best and will live on in our hearts and our great memories. “